Are Spirits the Next Superstar for China’s Drinking Culture?

Home/Spirits News/Are Spirits the Next Superstar for China’s Drinking Culture?

Are Spirits the Next Superstar for China’s Drinking Culture?

It is already a de facto recognition of the China’s growing market power in the global wine business: the 5th largest wine consuming country and the 7th largest wine producer in the world, China posts a market force that is to be reckoned with by any wine country looking for new opportunities for growth.

But what if we say that China also produces the most commonly consumed spirit in the world through the nation’s most celebrated alcohol ‘Baijiu’[1]and it accounts for 35% of the world spirits production, will you be surprised in disbelief? I don’t blame you because despite of Baijiu’s impressive production volume and value, nearly 99% of it is consumed within China, so given the large territory, regional variations, and the fast changing consumer habits the country is famously known for, let’s take a look on how spirits, another important alcoholic category is doing in this market of opportunities.

The Current Market Status of Spirits in China

China is actually the world’s biggest market for spirits where imports are expected to be worth USD24 billion by 2021! [2]Below is a brief overview of the current market status for spirits in China:

Although Baijiu is little known outside of China, it is still the nation’s traditional spirit with a strong cultural root that could be traced back as early as 6000 years ago. To put it in perspective, 19.5% of the overall alcohol consumption in China in 2017 came from Baijiu, compared with 5.6% in ‘other spirits’, and only 2.8% in ‘wines’. [3]

Meanwhile, we see a high brand concentration for the super-premium sector of Chinese Baijiu as 99% of the market in this sector is dominated by Maotai (over 60%), Wuliangye (30%), and Guojiao 1573 (5%, a high-end brand by Luzhou Laojiao), the three mega brands of Chinese Baijiu. This super-premium movement is also reflected in the overseas markets for Baijiu: in 2018, the export value for Baijiu reached to USD655 million, a nearly 40% growth compared to the previous year[4]and this is partially due to the ‘internationalization’ carried out by the premium and the super-premium Baijiu brands. For instance, in October 2018, Luzhou Laojiao sealed a sponsorship deal with Australia Open and became their associate sponsor for the next five years. In September 2018, Fenjiu Group announced that the construction of a production site capable of producing 600 tons of light aroma Baijiu was launched in Canada, not to mention the Group’s sponsorship for the 2019 Spirits Selection by Concours Mondial de Bruxelles. 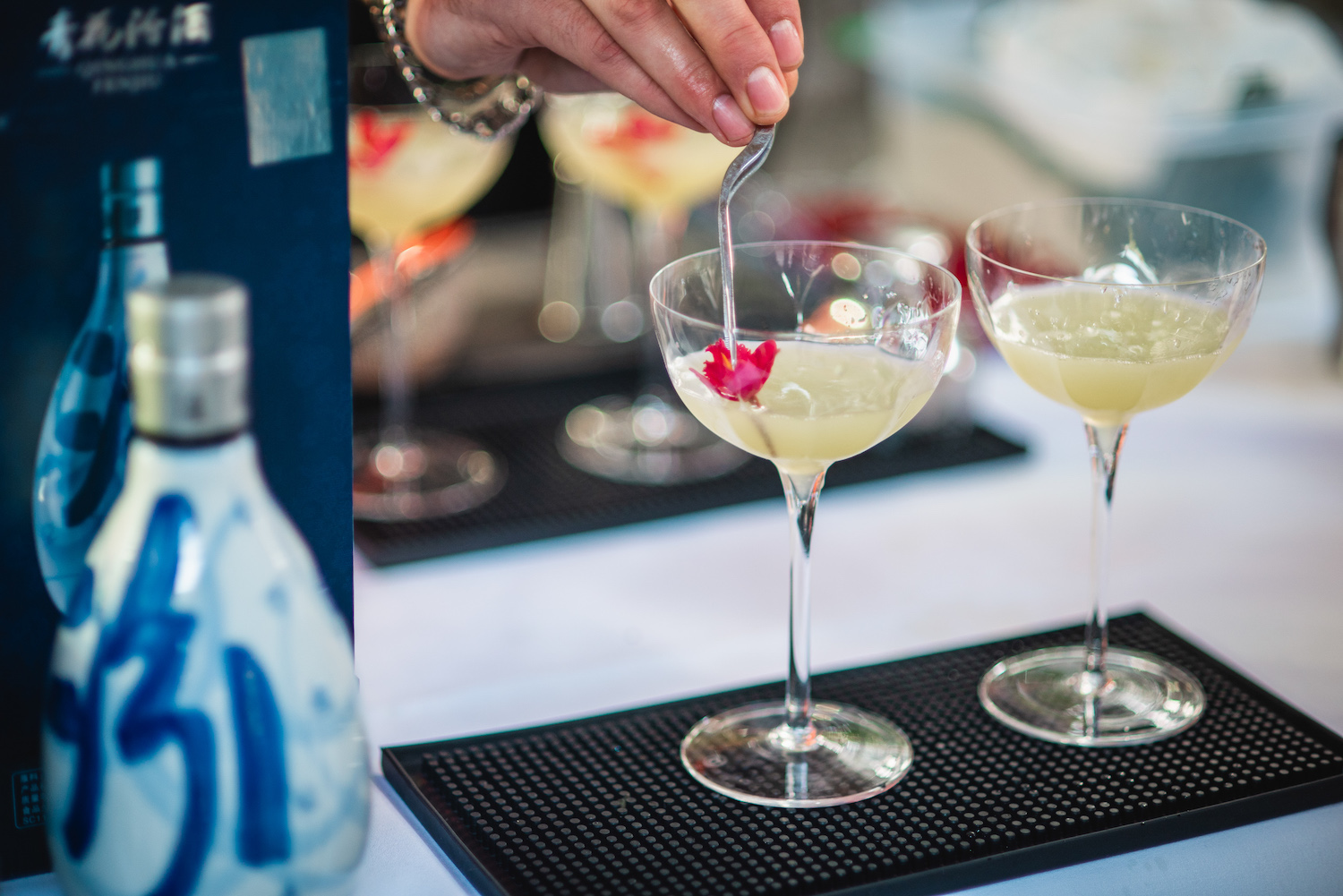 “We see a high brand concentration for the super-premium sector of Chinese Baijiu as 99% of the market in this sector is dominated by Maotai (over 60%), Wuliangye (30%), and Guojiao 1573 (5%) the three mega brands of Chinese Baijiu.”

On the other hand, the International spirits are steadily making their inroads to the Chinese markets. Brandy is the unparalleled market dominator next to Baijiu compared with other spirits on both import volume and value.In 2018, the import value and volume for Brandy in China reached USD 1.06 billion (20.62% growth) and 41million liters (12.34% growth) respectively[5], followed by Whiskey, Rum (the only category that had a double decline in both value and volume), Gin, and Vodka. It is worth noting that though France is experiencing fierce competitions from Australia and Chile in the wine sector, French brandies (incl. Cognac and Armagnac) currently take three quarters of the Chinese spirits market! Meanwhile, U.K. brings a positive impact on China’s Whiskey imports and Shanghai remains to be the No.1 market for imported Whiskey, followed by Beijing.[6]

A Quick Glimpse of the 2018 Spirits Import Market in China

Source: CCCFNA, 2018
*The reason why Mainlan China ranked the 3rdin the chart is due to the repurchase of Baijiu from overseas.

On one hand, the general market perception of International spirits as premium is prevalent in China, fueled by the world-famous spirit brands such as Hennessy, Martell, Dalmore, the Yamazaki, and Grey Goose, to name just a few. According to a recent research by China’s biggest search engine Baidu, people who search or purchase spirits online also have the highest search for topics related to luxury buying and premium lifestyle, indicating a strong correlation between spirits consumption and luxury.[7]

On the other end of the spectrum, spirits are also stepping down from the throne as consumers who are younger and with strong purchasing power have come into the scene. Research shows that consumers age between 20 to 35 years old are mostly likely to purchase wines and spirits imported from another country than any other age group online, and the highest growth rate on consumption also falls into this age group.[8]Unlike generations that came before them, this group of younger consumers are demanding for more personalized, relevant products that fit with their netizen lifestyle. 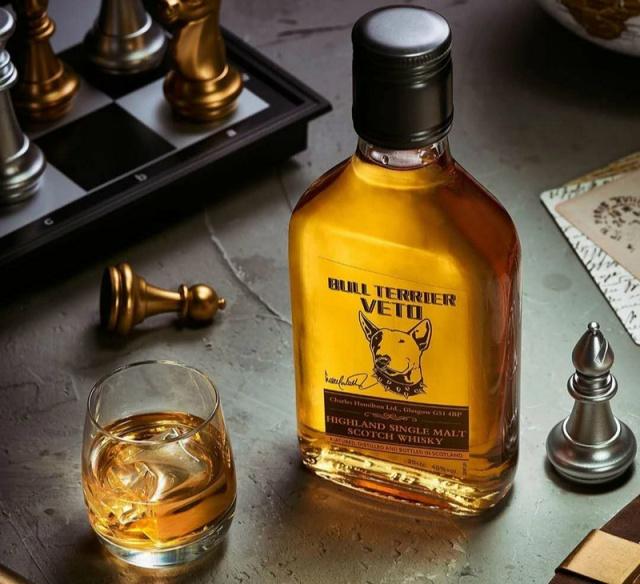 Bull Terrier, a single-malt Whiskey made in China, has become an instant hit on the Internet, a 200ml bottle only costs 79RMB (approx.10 Euros) (photo: Bull Terrier)

People who search or purchase spirits online also have the highest search for topics related to luxury buying and premium lifestyle, indicating a strong correlation between spirits consumption and luxury.

And this has provided opportunities for Baijiu, a spirit category that is traditionally perceived as an older-generation’s drink. Brands from some leading Baijiu distillery houses have been gone in full scale to re-invent themselves: from repackaging to introducing low alcohol level products, from launching crossover projects with fashion/cosmetic brands to collaborating with International partners, from hosting world competitions to launching themed cocktails, and better yet, several Baijiu houses have even made a foray into the wine sector, often with hefty capitals to invest. This trend is also accompanied by a recent revival of young people studying and bringing back live the traditional Chinese culture. In other words, the ‘old’ is the ‘new cool’ now.

So how and where do Chinese consumers drink spirits? Cocktails certainly provide a very legitimate way on how spirits are enjoyed, and the development of cocktails in China is actually in sync with the privatization of the Chinese economy since they both took off in the early 1980s. “I believe there were better days for bartending in China since the cocktail culture is deeply associated with the ups and downs of the hospitality business in this country”, says Mr. Wei Zhang, a national first-level bartender, whose career path in bartending began in 1983 at one of Beijing’s first joint-venture hotels. When being asked about the current problems the cocktail industry might be having, Mr. Zhang believes that“bartending is a set of professional skills that require extensive training and people were once paid way higher than they are now. Besides, the communication and the intimacy between bartenders and their customers are disappearing. Now, a mechanical arm can make a cocktail and people are very happy about it.”On the other hand, Mr. Zhang is also very positive about the prospect of the business. “Cocktails definitely help spirits become more acceptable for consumers who have never and seldom consumed spirits before, this is especially true among the young drinkers, who, like to experiment new flavors and are more attracted to the presentation of the drink”, adds Mr. Zhang.

Mr. Wei Zhang pouring a glass of Brandy for his customer at his spirits/wine shop in Beijing, China (photo: Mia Zhang)

The ideas of experimentation and creativity run in the blood of the younger generation of Chinese bartenders such as people like Mr. Eric Feng Liu, a mixologist and the owner of MMC, a popular hutong bar in Beijing with a huge selection of gins from all over the world.“One of the major challenges the cocktail industry faces in China is the limited product availability here, and the primary reason why this is the case comes from the lack of education and training for mixology, as well as market promotion for bartending and the cocktail culture. As a bar professional myself, I feel the responsibility to show people, especially the younger consumers what bartending is, and what cocktails could really taste like. And the good news is that, we already have a large group of consumers who are very open to try new things, and this group has been continuously growing “, says Eric. 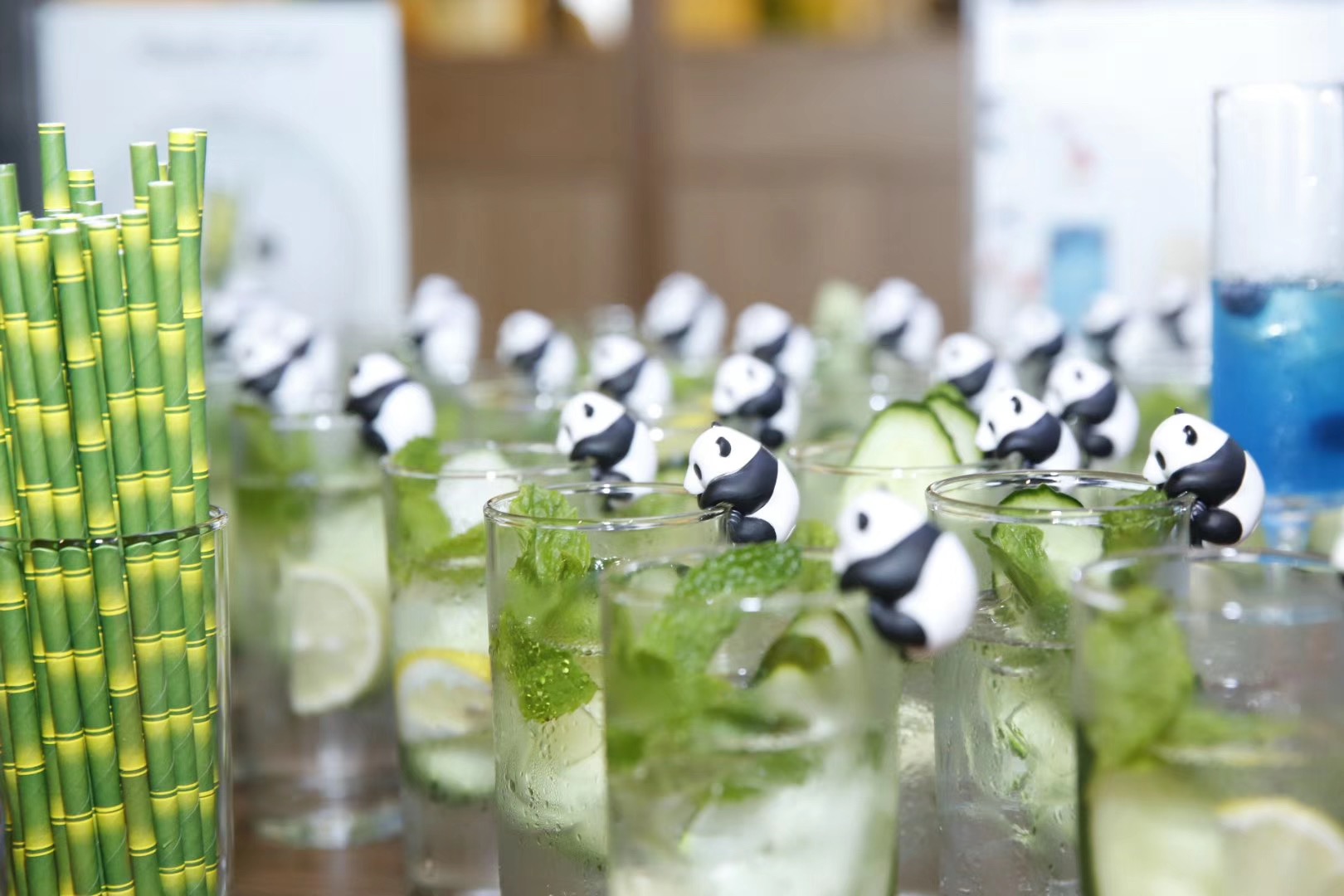 Who Are the Spirits Drinkers?

China is so large and the regional markets are highly fragmented for anyone to offer a one-picture-fits-all portrait of the spirits consumers in China, but one capturing trend is that due to urbanization and the widespread usage of the mobile devices, consumers are exposed to more brand choices and alternative buying options. Interestingly, among the highly wealthy sector of the market (average household net worth is USD 1.9 million), consumers who age between 30-40s are the most important age group for spirits consumption in China, whose interests often involve music, automobile, outdoor activities, bars and gastronomy. Among them one third have studied abroad and are becoming the main pillar of the society. [9]Unlike Baijiu, which has a wide gender gap with male drinkers outweighing female drinkers significantly, spirits in general has a balanced distribution between both genders. “Spirit category”, “country of origin”, and “price” are the top 3 factors for spirits consumption, and 66% of the purchase are made offline versus 34% online for this consumer group.

However, the gender gap appears when the general consumer group is in the picture and this is especially obvious for offline purchase as male buyers dominate and range between 50% to 80% compared to female buyers in supermarkets and special retail stores. Unlike the super wealthy sector, the general sector is slightly older and age between 35 to 55 years old, with an average spending wildly varies between as little as 8RMB (approx. 11 dollars) to 50,000 RMB (approx. 7000 dollars). And not surprisingly, Baijiu still ranks far ahead compared to other spirits, followed by Whiskey (more in the northern region of China), Brandy (more in the south), and Vodka.

E-Commerce, More Than Just Being Convenient

In 2018, the market value for alcoholic drink sales online reached over 75 billion RMB in China.[10]As the younger Chinese consumer is more active on digital platforms than their peers in other countries, we will only see further growth on this channel.

However, the booming of e-commerce does not only bring convenience to the shopping experience, but also allows deeper product penetration to China’s lower-tier cities and uncover an enormous territory of untapped market.

As a result, more choices among different product categories are made possible, and research shows that more than 35% of sales were made for lesser known product categories such as plum wine, sake, and rum. New product origins are also becoming a popular factor for making a purchasing decision and the category that benefited most from this trend is Japanese whiskey. [11]

The booming of e-commerce does not only bring convenience to the shopping experience, but also allows deeper product penetration to China’s lower-tier cities and uncover an enormous territory of untapped market. 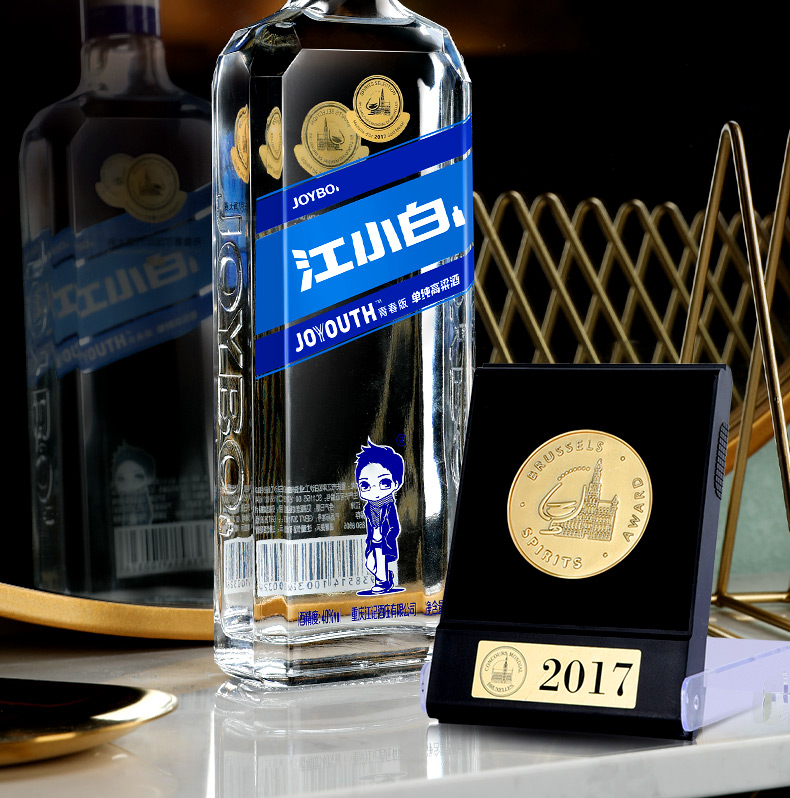 “A recognizable brand definitely helps with the sale”, confirmed by many liquor stores I have visited in Beijing. While distributors go for tradeshows and tasting fairs to look for new products, they are increasingly paying more attention to brands that have gained some market awareness in China, and trade awards can be an effective booster for making a brand visible.“Consumers often come to our store and ask for specific brands if certain brands have won an International award”, says Ms. Chen Wang, the Marketing Director of Jointek Ershang supermarket in Beijing. This sentiment is also shared by Mr. Wei Zhang as he believes that“a quality award helps a first-time consumer to choose a product more confidently”
Winning an International award has become a selling point for many spirits producers.(Photo: Jiang Xiao Bai)

[1]Baijiu, literally translates to ‘white liquor’ due to the water white color attributed to most Baijiu. There are currently 12 acknowledged aromas in China, with the ‘big three” being the “light aroma’, “strong aroma’, and “sauce aroma’.