In the following article of the baijiu steering committee, Prof. Wu details the characteristics of the Sauce-Aroma category, one of the four main categories of baijiu.

Chinese baijiu is a distilled liquor which is made from starch or sugar as rawmaterials with adding koji or “qu” (saccharifying & fermentation agent) for solid, semi-solid or liquid fermentation, then distilled, stored and blended.

Today’s focus is on Sauce aroma baijiu. This style of Baijiu derives its name from its distinct and lingering fragrance, which is said to resemble soy sauce. The category is closely associated with the town of Maotai, located in the northwest of Guizhou Province, and the Kweichow Moutai Distillery.

Sauce aroma baijiu derives its name from its distinct and lingering fragrance, which is said to resemble soy sauce 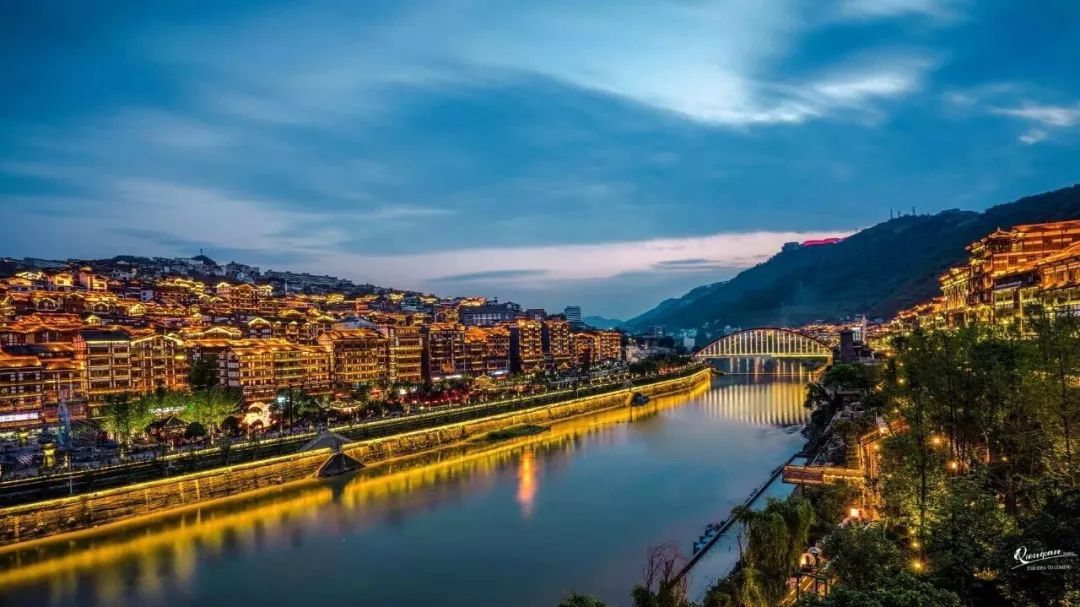 Its production is labor and resource intensive, lasting one year and involving two feedings with fresh grains, nine cookings of the grains and eight fermentations in subterranean pits lined with stone bricks. The distillates are aged separately for three to five years in ceramic urns, and then blended and typically bottled at 53% ABV.

Its production is labor and resource intensive, lasting one year

Sauce-Aroma baijiu is made of sorghum, a cereal commonly grown in Asia. Sorghum so called “glutinous” is preferred to “ordinary” sorghum because its starch is richer in amylose. Due to its unique structure, glutinous sorghum has a better resistance to high heat and boasts a better nutritional value.

Step 1 : the making process of Koji, the inoculation agent

Koji, namely Da”qu” in this category, is the  saccharifying and fermenting agent , and is sometimes incorrectly translated as brewer’s yeast, but contains much more than just yeasts.

Koji preparation is a step of its own, it is the soul of the spirit! We begin by crushing moistened grains of wheat into a paste, shaping them into bricks and continuously adjusting their moisture level in a controlled environment. By the end of this process the bricks have drawn yeasts, bacteria and molds from the surrounding air, which eventually coats the surface and interior of the bricks. These bricks will eventually contain many microorganisms as well as three major kinds of hydrolases: amylase, glucoamylase and protease. The hydrolases transform starch and protein from the grain into amino acids (the nutrient of the yeasts) and the all-important glucose which will finally be converted into ethanol by yeasts.

The aroma components developed by these microorganisms during fermentation are the main sources of Sauce-Aroma flavor, which directly affects the characteristics of liquor. Koji is evaluated for its hydrolase activity but is also submitted to a sensory evaluation before being used: It must develop a fragrance of fermented wheat, with no sour or other peculiar odor. On the surface, there should be gray-white spots of mycelia, but no gray-black flora. The mycelium color inside the bricks should be white.

The aroma components developed by the microorganisms – bacteria, molds and yeats – during fermentation are the main sources of Sauce-Aroma flavor, which directly affects the characteristics of liquor. 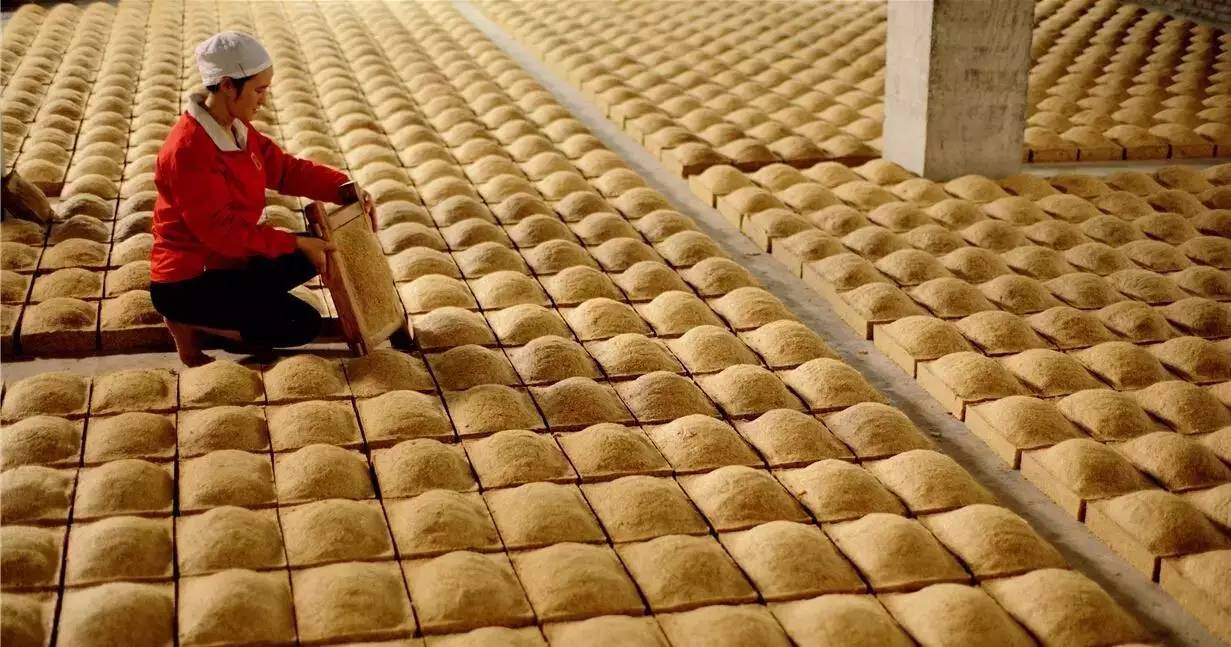 In the first step of the process, named “Xiasha stage”, only about a fith of the grains are crushed; the rest is left whole. The sorghum is washed several times in warm water to remove detritus and allow it to absorb liquid. It is then steamed for about two hours and spread on the ground to cool, being turned over with shovels throughout. A process similar to the malting process used in the production of single malt whisky. Once the sorghum has cooled to the desired temperature, “qu” is added and the grains are piled into mounds of about two meters high.  Piling the mash helps saccharifying the starch while absorbing some of the microorganisms present in the surrounding air, such as fungi, thermophilic bacillus and yeasts.

Over the course of 4-5 days, the aerobic conditions will cause the microorganisms to multiply exponentially, causing them to become visible and white patches will eventually form over the piles of fermenting grain.  The technical jargon for this development is “Aerobic Stacking Fermentation Technology”. The temperature of the mound rises to 45-50°C, and a fruity smell begins to emanate.  Eventually, when the pile has achieved the required core temperature and the number of microorganisms have multiplied to the necessary level, the mash is shoveled into fermentation pits of about 14 to 25m³.

These pits are sealed with mud to prevent aeration and left to continue the anaerobic fermentation process. After a month, the mash is removed from the pit and mixed equally with freshly washed sorghum and finally distilled. After this first distillation, the mash is spread to cool, and fed with fresh “qu” and some of the tail distillate.

The fermentation process is repeated seven times:  from piling to pit, each cycle lasts 30 days and  is followed by a distillation cycle until the final distillate is ready.

This complicated process eventually yields this characteristic sauce aroma so prized by its producers. The quantity of tail liquor poured into the pits decreases gradually, from 15 liters per pit for the first cycles to 5 kgs for the 7th, with finally no liquor poured in the final round. This process, called “Spilled-Tail Liquor” is another specificity of Sauce-Aroma baijiu production. 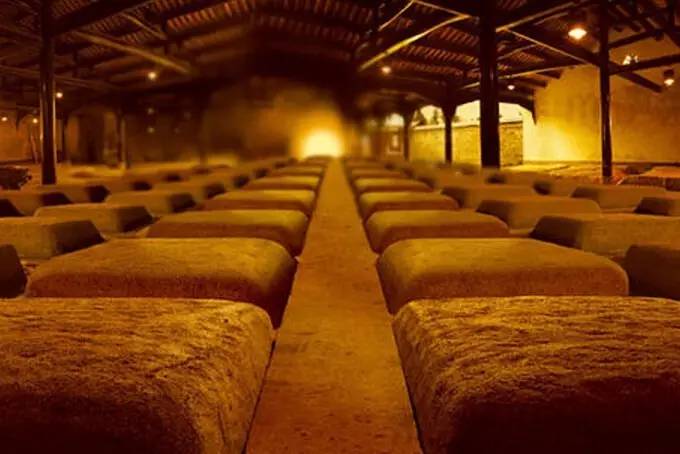 Anaerobic fermentation in 8 cycles of 30 days each, in stone-pits sealed with mud

Obviously, the distillates produced in each cycle has very different chemical characteristics, alcohol levels and flavors: The liquor from early cycles is harsh and sour, the middle cycles are smooth and aromatic while the last cycles are usually bitter and smoky.  The spirits distilled from the grains at the top of the pit are the key component of the sauce aroma that is characteristic of this style of baijiu.  The liquor resulting from the mash at the bottom of the pit is called “pit-flavor liquor”, and the one obtained from the grain in the middle is named “mellow -flavor liquor”;  these various distillates are aged separately for at least three years in ceramic urns, then blended to achieve the desired flavor. The final product is typically bottled at 53% ABV. 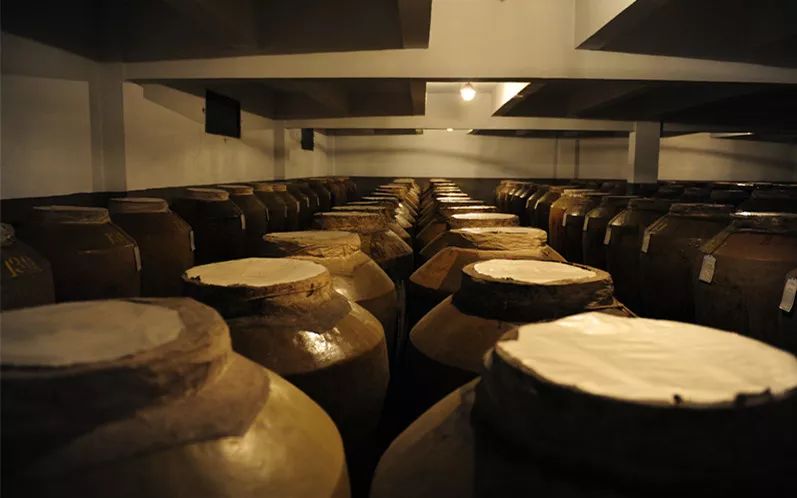 Aging the different distillates in ceramic urns for minimum 3 years

Sterilization of the pit once a year

A little-known fact is that, every year the pits are sterilized to kill the bacteria and remove the undesired smells. To do so, each pit is burnt with 50 to 100 kgs of wood; when the temperature eventually drops, the ashes are removed, and a small amount of grains is scattered in the bottom and cleaned again. Finally, 7.5 liters of standard liquor is sprayed into each pits and 15 kgs of “qu” is added to nourish and activate the floors. Only then are the pits ready to be used for further production.

Sauce Aroma Baijiu has an intense, complex and layered flavor that can only be achieved by blending dozens, in some cases more than a hundred aged distillates.

A series of Maillard compounds are responsible for the caramel, almond, coffee, dark chocolate and soy sauce-like aromas of this type of baijiu. Discrete earthiness, yoghurt and mushroom-like nuances and pineapple-like fruitiness are also typical. 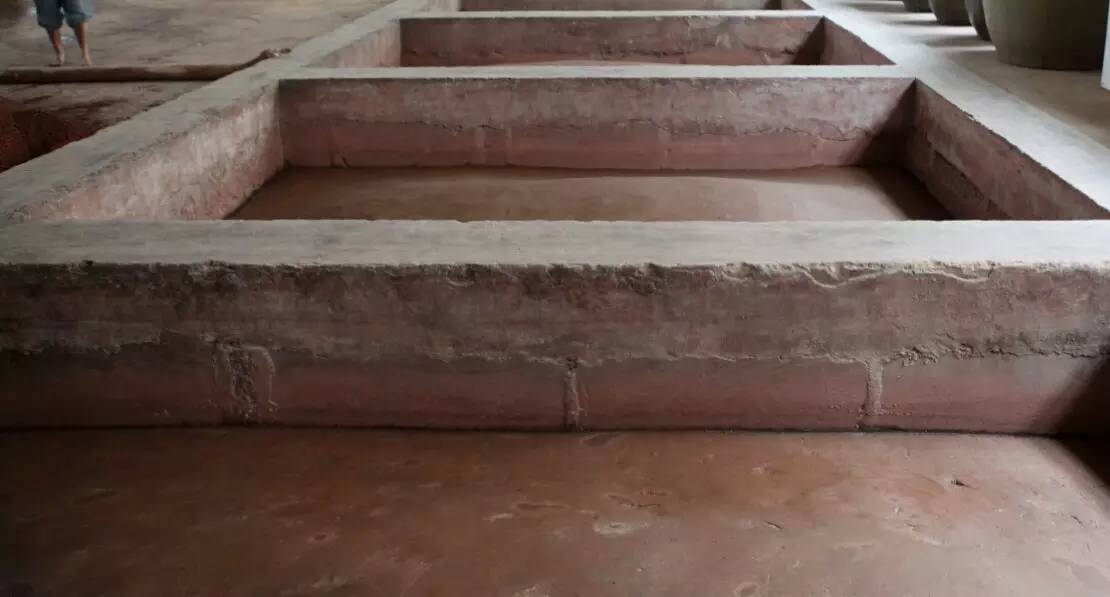 The empty pit after cleaning, ready for a new complete cycle 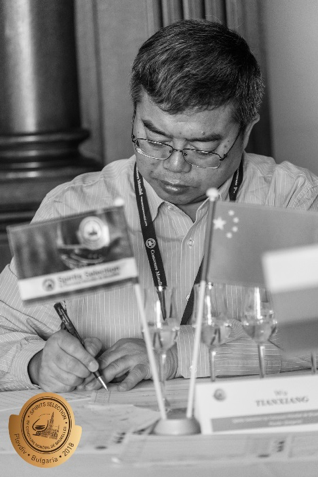 This article has been written by Prof. Tanxiang Wu, Expert in Sauce-aroma Baijiu,  President of Mingde College of Guizhou University and Professor of Baijiu making, and thanks also to some insights from the book  “Baijiu, the Essential Guide to Chinese Spirits” – Author : Derek Sandhaus”