Although the company was launched in 2021, its history in fact dates back to 1900. This was the year sugarcane grower Charles Albert Ruscade was born, later to become known as ‘Papa Rouyo’. The setting is Le Moule, in eastern Grande-Terre.

The Papa Rouyo project is unique in Guadeloupe. Charles Albert Ruscade farmed his land as a sharecropper from 1919 through to his death in 1980. After 60 years of farming, the family asked to buy the land, as they were entitled to by law. Danielle Galli, Papa Rouyo’s daughter, would wage a legal battle for 17 years to win her claim to the land. The court case ultimately ended in a ruling in 1997, vindicating the Galli family and establishing a legal precedent. Since then, other families have been able to recover the land they had also been farming under the sharecropping system.

Many years later, Papa Rouyo’s grandson, Judes Galli, and his son Joris Galli met with growers from Le Moule. Most of them were selling their sugarcane directly to the industry, but Judes and Joris’ ambition was to produce something local, something new yet traditional and most definitely different. The growers Le Moule sugarcane contains a lot of sugar and is absolutely perfect for making good agricultural rum. And it just so happens that this is exactly what the Galli family was planning to do. 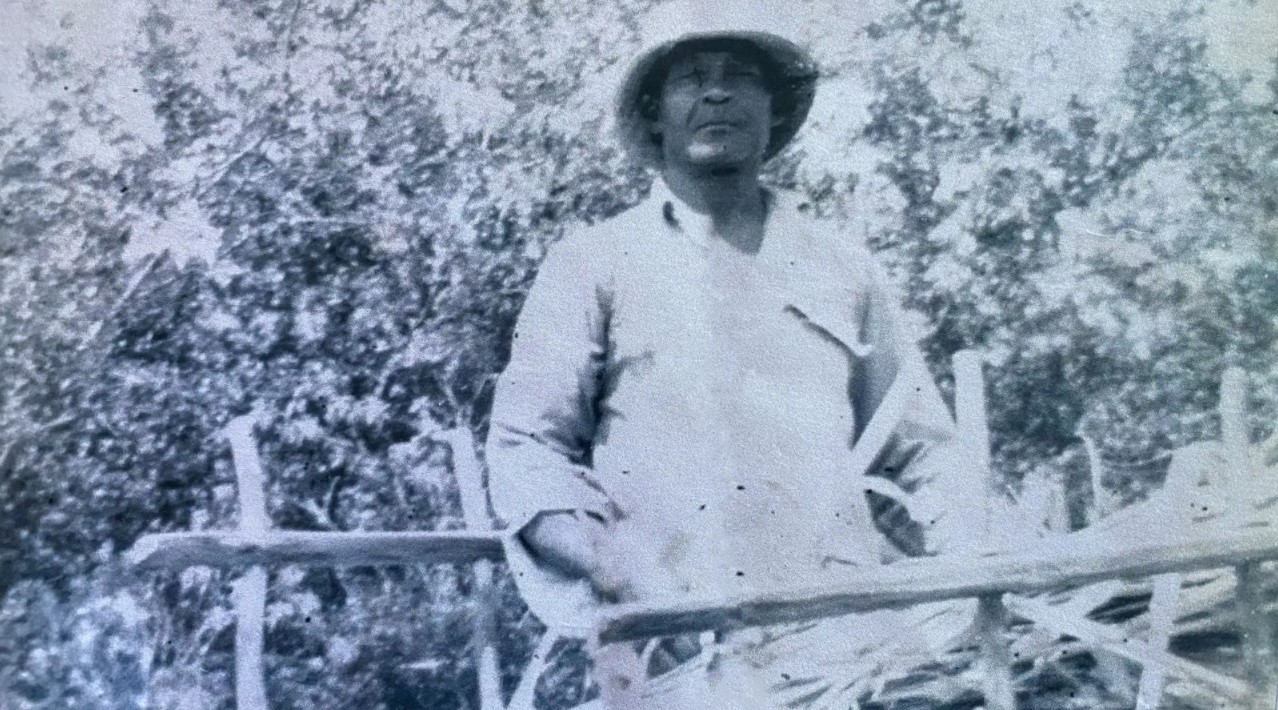 The family subsequently partnered with two other growers, Tim Synésius and Jean-Marie Gobardhan, and together they decided on calling them ‘master sugarcane growers’ to launch their project. Both farmers are an integral part of the plan. Other growers, who are members of the agricultural interest group (GFA) in L’Ecluse, also decide to supply them with sugarcane. A total 16 hectares of sugarcane are farmed to supply the needs of the mill and the new distillery. Judes, Joris, Tim and Jean-Marie fund the project whilst also providing support for the other growers. Although the GFA members do not own the distillery, they still feel that they are a part of it and form an essential link in its plans to produce rum.

The family subsequently partnered with two other growers, Tim Synésius and Jean-Marie Gobardhan, whom they call ‘master sugarcane growers’ to launch their project.

Obviously the rum had to stand apart from other brands – the question is, how? Joris had perfected his knowledge in the Charente region of France where he became familiar with double distillation in pot stills. In the French West Indies, where rum is traditionally distilled in a Creole column still, using a pot still would certainly add the novel element they were looking for. And fortunately for them, production specifications for Guadeloupe rums permitted the use of this type of distillation. So they ordered two pot stills from a French manufacturer and named them for the women who had had a special place in Papa Rouyo’s life. The first pot still (wash still) was named after his wife Agathe, and the second (spirits still) after his eldest daughter Danielle.

In the French West Indies, where rum is traditionally distilled in a Creole column still, using a pot still would certainly add the novel element they were looking for. 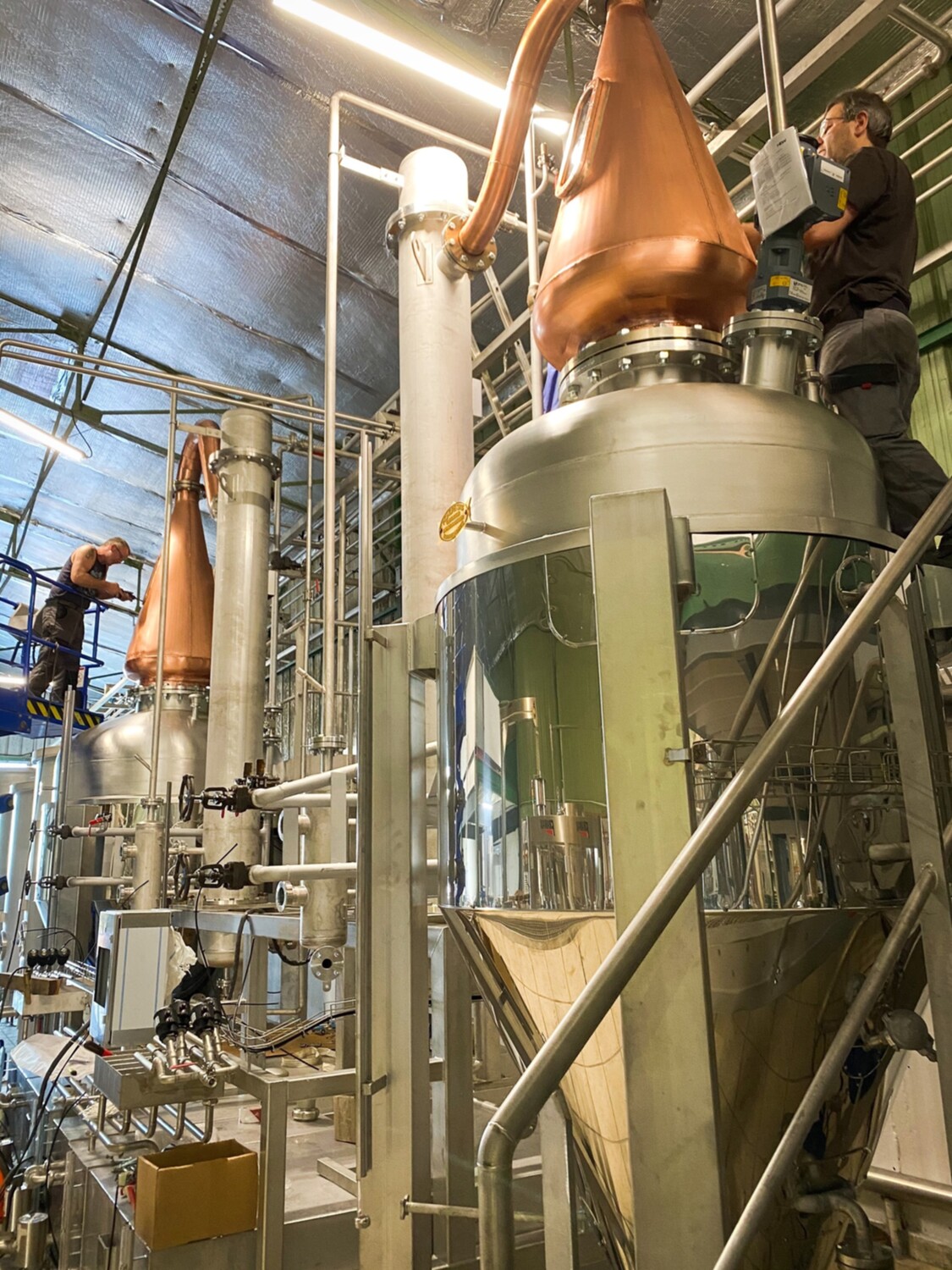 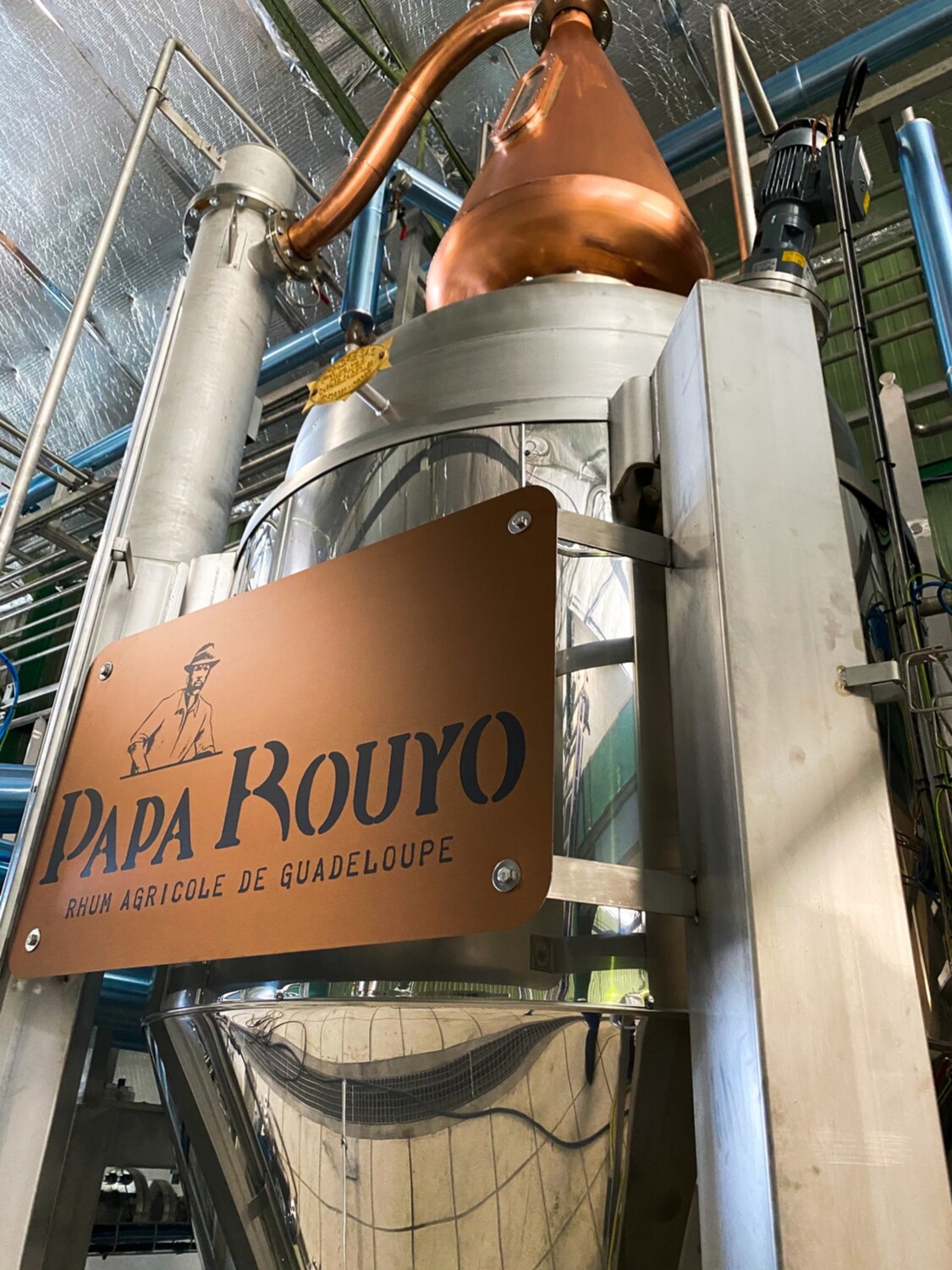 The first rums were distilled in February 2021 and the first white rum was called ‘Le Rejeton’ or ‘scion’. The name was chosen for three reasons. Joris and Judes are Papa Rouyo’s ‘scions’, and Danielle Galli ran a restaurant of the same name, which her parents liked to patronise. The ‘scion’ of a sugarcane is also new growth that is not harvested and becomes overripe. 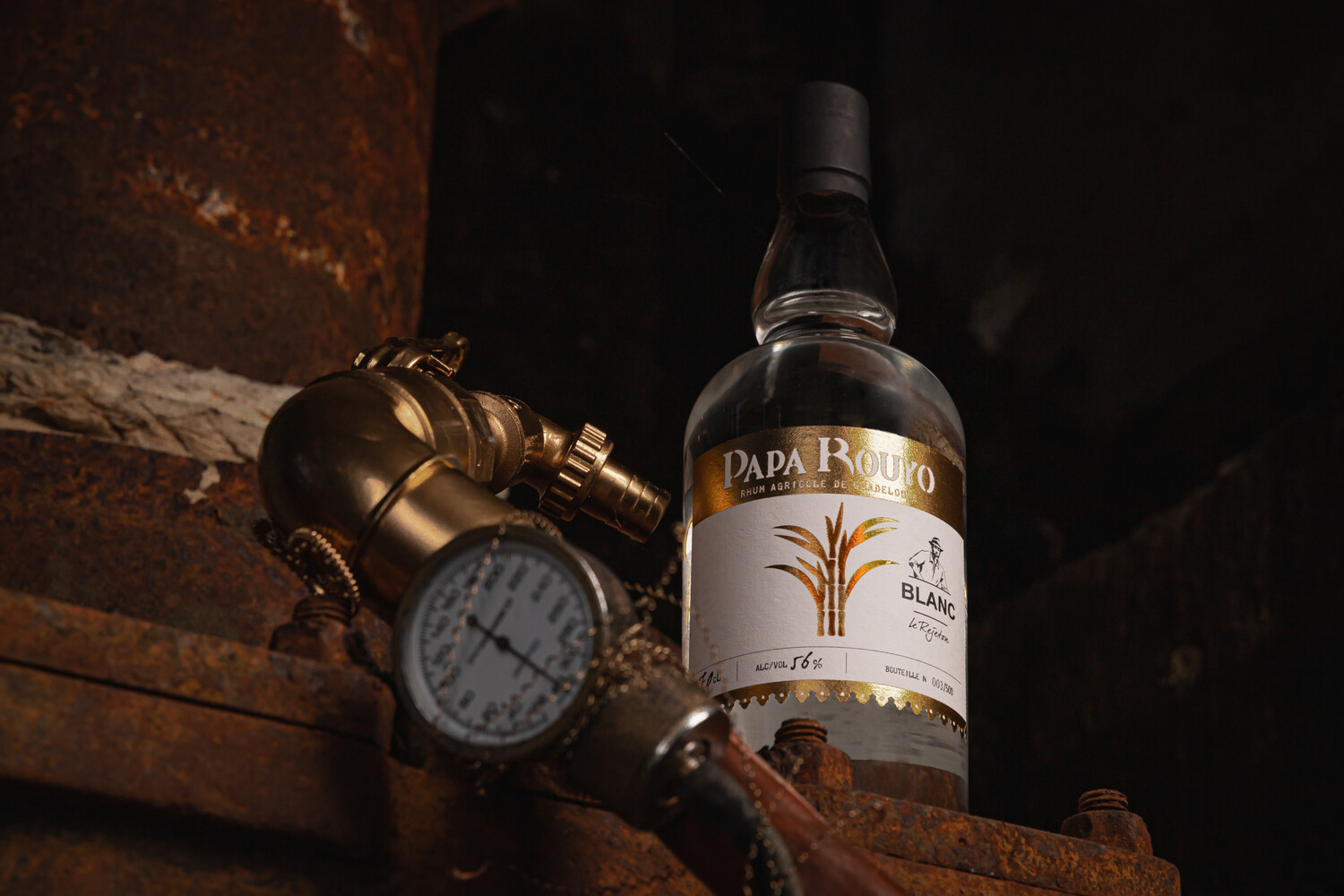 Out in the field

Guadeloupe is located in the Lesser Antilles and was originally called ‘Karukera’, meaning ‘island of the beautiful waters’ in Arawakan. Papa Rouyo’s fields of sugarcane are situated in eastern Grande-Terre, whilst the location of the distillery is in eastern Basse-Terre, in Goyave, at the foot of the volcano. But like everything on the island, neither are far from each other.

The soils are clay-limestone and help the sugarcane put down roots. Limestone is very porous, so that there is no retention of rainwater and the roots have to plunge down deeper into the soil. Strangely, this quickens the rate of ripening. This aspect is something the wine industry is very familiar with – it is said that the finest wine comes from deeply-rooted vines. The blocks are located 50 metres above sea level and are strongly influenced by the easterly winds rising off the Atlantic. The breezes and ocean spray have a cooling effect on the area, whilst also instilling a measure of salinity in the sugarcane. I was told that this aspect would fully reveal itself when the rums were tasted, so we were very keen to taste them. The sugarcane comes from the following varieties:

In order to show respect for the soils and improve their quality, the master sugarcane growers work as traditionally and naturally as possible. The sugarcane, for example, is cut by hand and only in the morning because the temperatures are too high in the afternoon. The mill is not very far from the fields so that when the sugarcane is crushed it is ultra-fresh.

After being fermented and distilled, the rum is matured in French and American oak barrels. To ensure traceability, the juice from each block is matured separately. 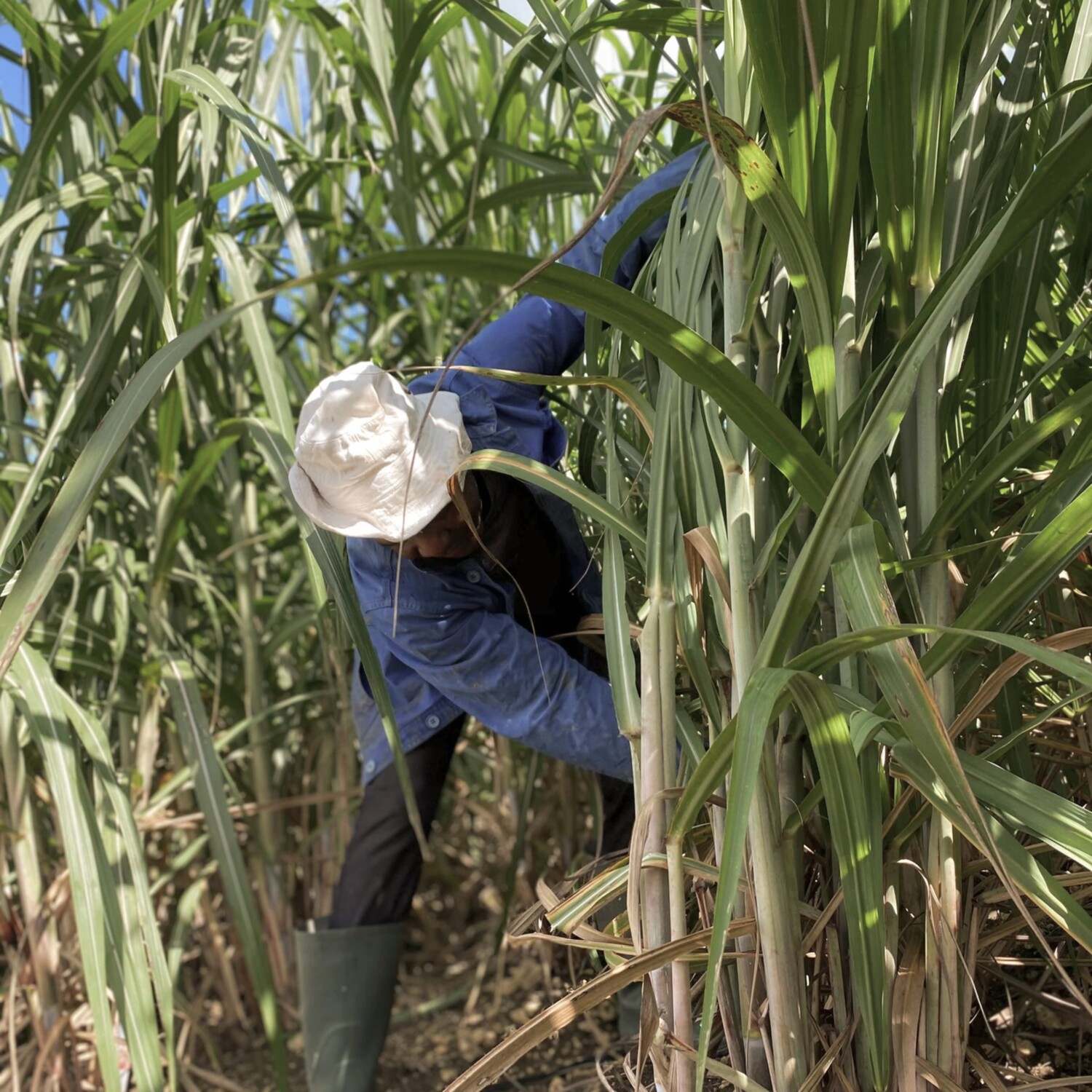 A source of pride and joy

Project manager Chloé Leguérinel often walks through the fields and the other day, she saw one of the farmers crying. “He has done this job for fifty years and it’s very physical labour.”

“All my life, I have done a job that no-one wanted to do and no-one was even aware of”, he added.“It is really hard work, but now I can see our bottles of Papa Rouyo in stores. For us, this is quite simply amazing because it puts the producers at the very core of the project and of the community. I am a part of Papa Rouyo and I know where my sugarcane goes”

“It is really hard work, but now I can see our bottles of Papa Rouyo in stores. I am a part of Papa Rouyo and I know where my sugarcane goes”.

When he opens a bottle and pours a glass, he now knows that this is the fruit of his labours. He feels immensely proud and the rum seems to taste even better.