Delving deeper into the workings of the standard Guadeloupe column

Delving deeper into the workings of the standard Guadeloupe column

The most commonly distillation technique used in Guadeloupe is the multi-stage continuous distillation column with reflux (also referred to as a Creole column) and it produces rums with a variety of aromatic profiles. The height of the column as well as the number of plates and their diameter has an influence on the aromatic profile of the end distillate, so that each distillery can have its hallmark style. The stripping portion must have at least 15 plates (Guadeloupean distilleries have an average 20 plates) and the enrichment portion no more than 50 plates (in practice, between 5 and 9 plates are used). However there are no restrictions on the diameter of the columns and the PGI does not make use of copper mandatory for the enrichment column.

The ABV of the distillate can be no more than 90%, whatever the type of equipment used.

We spoke to Dominique Honoré, who has built dozens of rum production units with columns or stills throughout the world and mainly in Cuba, Guadeloupe, Mauritius, Reunion Island, Mexico, East Africa and Sri Lanka.

Dominique Honoré: The most recent columns are built based on the following model: a degassing section with 4 plates; a stripping portion (also called a distilling/scrubber column) with 20 plates and an enrichment zone with 5 to 9 plates.

The ‘vesou’ enters the degassing section where the aim is to remove all the volatile components (ammoniac, H2S…) to limit their occurrence in the distillation section.

The must is then directed towards the upper plate (the 20th if there are 20) of the stripping portion and then heads downwards, meeting the vapours. This is when the separation of the different components occurs. This part of the column is comprised of stainless steel plates and valves. Manways allow each plate to be maintained easily. The valves ensure the column is automatically drained when distillation stops, preventing the must from clogging the plates.

“The most recent columns are built based on the following model: a degassing section with 4 plates; a stripping portion (also called a distilling/scrubber column) with 20 plates and an enrichment zone with 5 to 9 plates.” 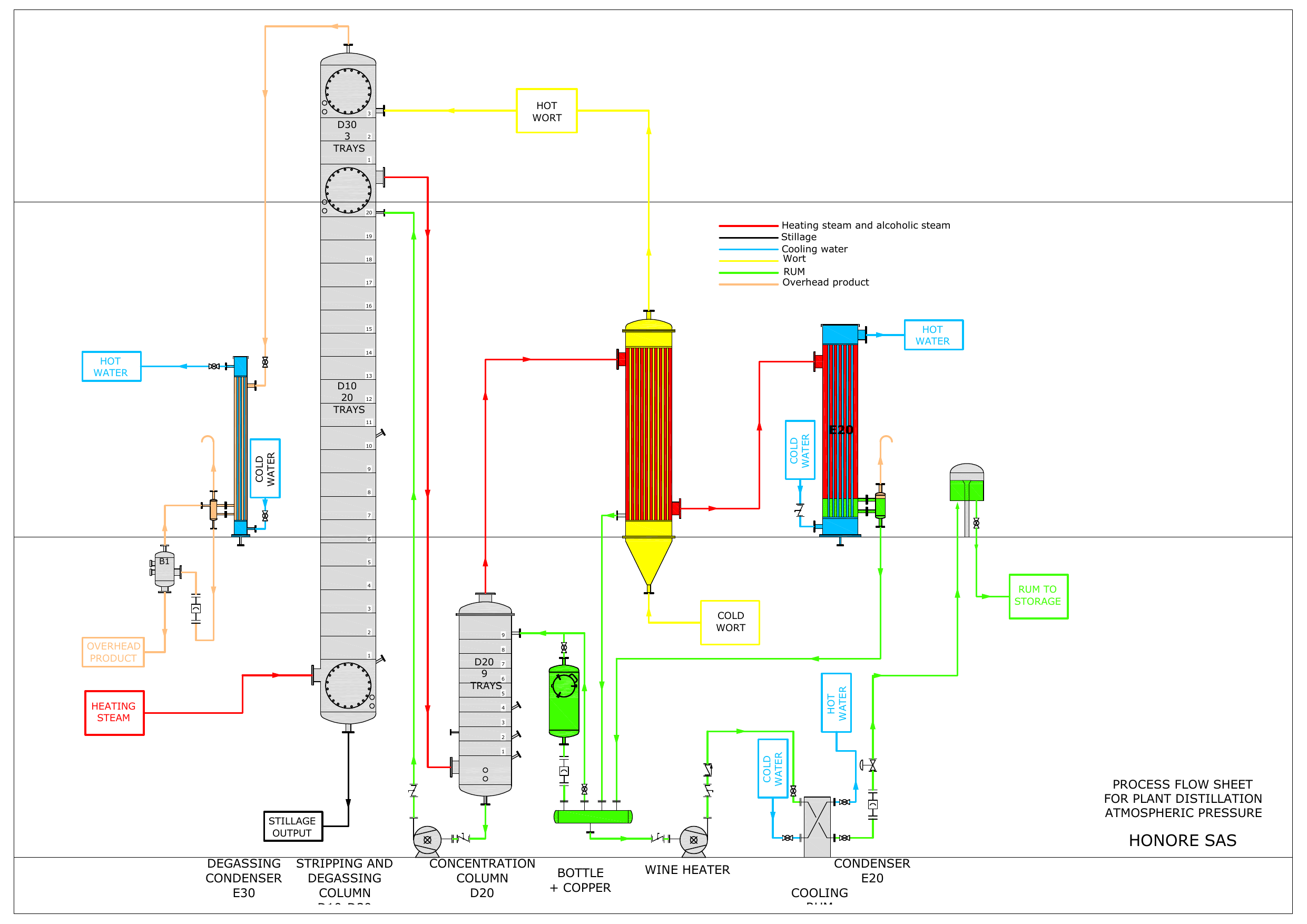 DH: The vapours that exit the top of the stripping column are directed towards the enrichment column, which can be located above the stripping column or offset, depending on the height available in the workshop. The plates are made from stainless steel and fitted with 100-mm diameter caps. They are constantly steeped in alcohol so that the apparatus can be very easily stopped or started. This is the part of the column where the ‘classification’ or ‘separation’ of the various spirits occurs. In Martinique, the appellation imposes mandatory copper plates for the enrichment column, whereas in Guadeloupe, the choice is left up to each distillery.

The vapours of alcohol then enter the condenser situated right at the top of the column. Through a system of reflux, part of the spirit exiting the condenser is injected back into the enrichment column by gravity. Reflux can be likened to double distillation whereby the liquid-phase spirit is returned to the upper plate of the enrichment column to improve its quality.

On the enrichment column, spirits can be drawn from different plates or quite simply at the head. The more the spirit is drawn from the bottom, from the lower plates, the lower the ABV and the higher the volatile substance content. Each master distiller has their own technique.

The distillate is then transferred to the daily collector.

“On the enrichment column, spirits can be drawn from different plates or quite simply at the head. The more the spirit is drawn from the bottom, from the lower plates, the lower the ABV and the higher the volatile substance content. Each master distiller has their own technique.”

Thierry Heins : What part does copper play in all this?

DH: The GI allows distilleries to choose between stainless steel and copper but most of the modern columns are made out of stainless steel. Nevertheless, some copper on the inside of the pot still is essential for allowing complex chemical reactions to occur, namely for eliminating the very volatile sulphur compounds (among the main ones is Dimethyl trisulfide or DMTS) and promoting the formation of esters which tend to lend the distillate fruity characters. To enable contact with copper ions at one stage of the process, these stainless steel columns are equipped with a ‘bottle’ containing copper components, which is located on the reflux pipe.

Nowadays, columns are no longer entirely made from copper. One of the reasons is because the copper currently produced by manufacturers is extremely pure, making it very sensitive to the acidity in the must and the spirit. In the past, copper columns eroded more slowly because they were made from an alloy of copper, zinc, lead and antimony. This type of alloy is no longer manufactured.

TH : Legislation on spirits exports is increasingly restrictive, and especially with methyl carbamate and copper residues. Won’t “all-copper” stills produce distillates that are difficult to export to these markets?

DH: It is quite common in the distillation world for people to consider that pot stills and columns made from copper produce finer quality spirits. Some of the folklore surrounding the still is actually untrue. Also, a large amount of copper (considered to be toxic) can subsequently be found in the end product by a spillover effect during distillation. There is also a high risk of polluting soils because the copper also occurs in the vinasse which is generally used as a fertiliser. Legislation on spirits exports is increasingly restrictive (the USA and Canada have become very stringent in this respect), and will force producers to review their distillation workshops in order to drastically reduce the levels of copper and ethyl carbamate (a by-product of the fermentation process, considered to be toxic), or to find solutions for removing the copper. These ‘coppery’ spirits are generally filtered with cation-anion resins or activated carbon, a process that often goes unpublicised. That’s because the filtering is not as selective as practitioners would like it to be, and some aromas are lost. Why else would marketing statements about unfiltered spirits be bandied around so often… The USA and Canada have become extremely restrictive over both residues and copper must be limited to the bare essentials.

“Legislation on spirits exports is increasingly restrictive, and will force producers to review their distillation workshops in order to drastically reduce the levels of copper and ethyl carbamate”