Bellevue, an eco-positive estate – An interview with Hubert Damoiseau

Bellevue, an eco-positive estate – An interview with Hubert Damoiseau

“Producers in the overseas departments are very much ahead of the curve when it comes to reducing their environmental footprint”.

The Bellevue distillery on the island of Marie-Galante is the first eco-positive estate in the Caribbean. We talked to site director Hubert Damoiseau about the resources required to achieve this status. The Bellevue distillery, which was originally family-run, has partnered with the Bardinet-La Martiniquaise group since 2001. It farms 55 hectares of sugarcane, which only cover 25% of its needs as it processes 12,000 tonnes of sugarcane annually and produces 1.6 million litres of rum. It is Guadeloupe’s second largest exporter of rum, and the archipelago’s third largest producer.

Thierry Heins: A pure sugarcane juice rum distillery is very energy-intensive, as it needs to extract juice from the fresh sugarcane (mills) and distil the fermented must. How do you produce this energy? Are you self-sufficient in energy?

Hubert Damoiseau: We have always focused on optimising our processes to rein in our electricity usage. For example, we use gravity feed to avoid using pumps which need electricity. But at the same time, we needed to continue to grow. Over a 20-year period, we increased production from 250,000 to 1.6 million litres of rum, which inevitably calls for a significant increase in our electricity consumption. The pumps, mixers and basically all of our equipment needs energy produced by electric.

To take our rationale a step further, the idea of a solar farm emerged in 2005. The aim was not to be self-sufficient because that would have required the energy produced to be stored in batteries, and batteries and their component parts reduce their environmental friendliness. A dedicated company was established in 2007, in conjunction with Akuo, a specialist in this field. We installed 2 Megawatt solar panels on the site which can produce over 3,000 MWh, whereas our annual consumption is lower than 1,000 MWh.

By law, the electricity produced must be put into the public grid and we buy it back as it exits the grid. Therefore, we do not refer to it as self-sufficiency but as offset.

“We installed 2 Megawatt solar panels on the site which can produce over 3,000 MWh, whereas our annual consumption is lower than 1,000 MWh.” 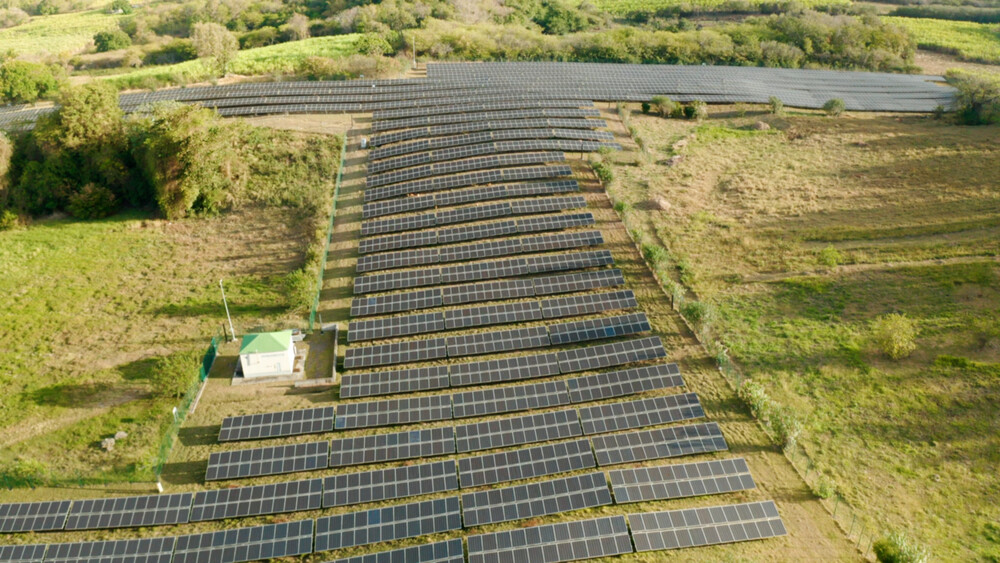 Another source of energy is the steam produced through burning the bagasse in the burner. Bagasse is the fibre from the crushed sugarcane from which the juice has been extracted. We use the mechanical force from the steam in a piston, which is now 113 years old, to operate one of our mills, instead of using diesel or electric engines. Similarly, we use the thermal power of steam to heat the distillation columns. We have enough bagasse to produce all the steam we need. The surplus bagasse also provides organic matter for the sugarcane fields, but we supply bagasse to the Marie-Galante sugar refinery, too, because it lacks sufficient quantities of it. 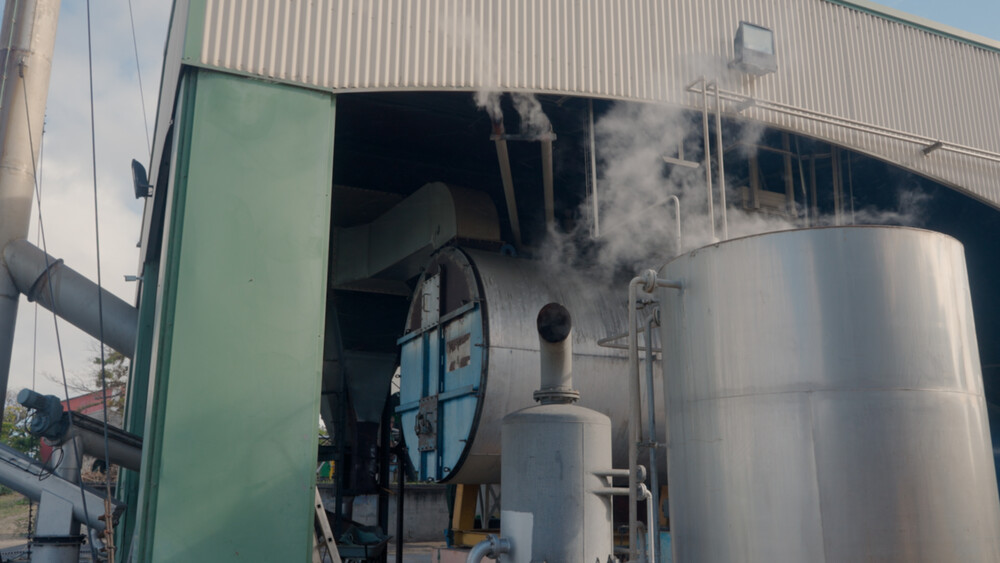 TH: A pure sugarcane juice rum distillery produces a significant amount of effluent, which can be a major source of pollution if not properly managed. How do you reduce your environmental footprint?

HD: When the new building was officially opened in 2003, we were the first distillery to comply with environmental standards in the West Indies. All the waste is treated and everything that can be recycled is. For example, the washing water, which could contain oil from the steam engine, is clarified and de-oiled. The oils are sent to France to be incinerated. Nothing goes back into the environment without being treated or recycled.

Vinasse is a by-product of distillation and accounts for very significant volumes. When you ferment sugarcane juice, you obtain wine that contains 5 or 6% of alcohol which is collected for distillation. This means that 95% of the volume in the fermentation tanks is at the bottom of the column. The liquid, which no longer contains alcohol, is sent to large basins behind the distillery. It is aerated using pumps to produce an aerobic fermentation and thus degrade the organic matter. Once the treatment is finished, the water can be used as agricultural water, and the sludge in the bottom of the tanks is spread as fertiliser over the cane fields using a slurry tanker.

“All the waste is treated and everything that can be recycled is.”

TH: The vinasse, bagasse ash and residue from the basins can be recycled as amendments for the fields. Why do you have to treat them before spreading? Do the by-products cover all the sugarcane’s needs during the growing season?

HD: Sugarcane needs a certain supply of nutrients to grow. In farming, we think in terms of nitrogen inputs (N), phosphorus (P) and potash (K), the N-P-K combination.

The ash from the boiler is rich in K, and is spread on the fields. The vinasse exiting the distillation column and the leftover at the bottom of fermentation tanks have a very low pH, i.e. it is very acidic. It cannot be spread over the fields as it is, otherwise it might acidify the soil. There is a chemical and organic need for oxygen that has to be brought down, which is why it is sent to the basins to be degraded and to reduce its BOD and COD, to raise its pH (decrease acidity) to 5.8-6, and to reduce its nitrogen content. We cannot spread it without following a land application plan coupled with the environmental protection credentials for our facilities. Many parameters are checked and monitored, and relate both to the by-products (acidity, NPK inputs, heavy metals, etc.) and the fields (soil study, risk of run-off, proximity to rivers, etc.).

It is a complex issue because the vinasse is not ready to be spread when the plants most need it or in the right season. Treatment in the basins lasts for 7 to 9 months and is costly, equating to 30 to 40 cents per bottle. We fully degrade the vinasse before spreading it, which is absolutely vital because on Marie-Galante all our gullies are dry. If we let the untreated water soak out into the natural surroundings, we would disrupt the entire ecosystem.

All the by-products are therefore treated and recycled, which enables us to make significant savings on inputs because we can reduce the amount of mineral fertilisers that we have to buy in. 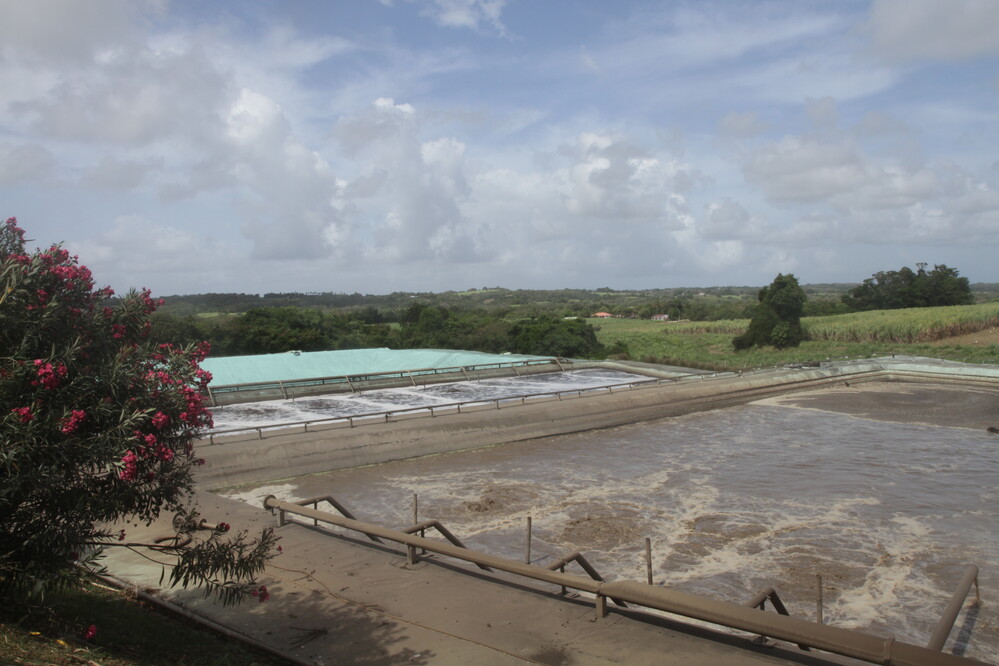 TH: Have you begun compliance with HVE or High Environmental Value standards?

HD: For several years now, we have reduced or even stopped using plant protection products as part of our field management, and have switched to machine interventions. We use a small disc harrow to hill up the sugarcane and remove weeds. We also reduce the amount of fertilisers by recycling by-products from the distillery and incorporating bio-dynamisers into our plantations. Some of our acreage is also farmed using agri-environment measures.

We chose not to aim for HVE certification, the purpose of which, in my opinion, is solely for PR. Saying this, the work we do on a daily basis aims to comply with HVE2 standards.

TH: You are in the process of preparing an organic rum. Can you tell us more? When will it be released for sale?

HD: We were the first distillery on Marie-Galante to distil an organic rum. It was distilled in February 2021 and is currently being matured in our cellars. We always mature our rums for many months before bottling and marketing. It will be released in the first half of 2022 and is made from white sugarcane grown on a limestone plot with very little clay. It is a variety that we grow on site exclusively as organic. For inspection and traceability reasons, we are not allowed to plant the same varieties of organic sugarcane as for conventional sugarcane.

“We were the first distillery on Marie-Galante to distil an organic rum. It will be released in the first half of 2022.”

TH: What are the challenges of growing organic sugarcane?

HD: The yields are much lower, around 50%, which means that we have to increase acreage to produce the same tonnage as for conventional sugarcane, whereas farmland is declining.

Organic inputs, which we cannot sidestep, replace mineral inputs – they are very expensive and not widely available. Also, a lot of field maintenance by hand is required, which considerably increases the cost price of organic sugarcane, and inevitably has a knock-on effect on the selling price. As a farmer, you need to be motivated to produce organically. As a distiller, it is easier to incorporate because you just have to slot processing of the organic sugarcane into a specific window. Obviously some products cannot be used, such as ammonium sulphate to control the acidity in the must. You have to be very careful about the development of bacteria. Are consumers ready to pay the price, apart from on small quantities?

“As a farmer, you need to be motivated to produce organically. Are consumers ready to pay the price, apart from on small quantities?”

TH: It’s a valid point. Consumers nowadays don’t just buy a ‘flavour’ but take a strong interest in the origin of the products they buy. The Millennial generation drinks less but better and is looking for authenticity and variety. This combination has created a very crowded marketplace. Do you think transparency and sustainability are prerequisites for establishing an emotional bond with the leading consumers?

HD: Sustainability is most definitely a seminal issue nowadays. We have a significant social and environmental responsibility. What do we want to leave for our children? We are doing things for the future, not for superficial marketing purposes or greenwashing. We also need to choose the words we use carefully and not oversimplify. For instance, authentic does not necessarily mean good or environmentally-friendly.

Producers in the overseas departments are very much ahead of the curve when it comes to reducing their environmental footprint, partnering with the farmers to achieve this. We will see how consumers receive our organic rum. The quality is just as high as for the other rums we produce but it will have a different flavour – because it comes from an organic block – and a higher price tag.

To end on your question about transparency, all you need to do is take a look at the production specifications for our rum GIs to realise the high standards are rums are made to.