In Guadeloupe, rum is an integral part of the island’s cultural and gastronomic traditions. In fact, it is more than just a tradition – it is a way of life in the archipelago. It can be agricultural or industrial, white or amber-hued, young or mature and light or flavourful – but no celebration would be complete without it. Although its nuances of flavour vary from one island of production to another, some may have noticed that Guadeloupe agricultural rums are traditionally bottled at higher alcoholic strengths than most spirits, usually ranging from 50 to 62% ABV. So why the difference? We offer some answers.

Concentrating alcohol and aromas through distillation

One of Guadeloupe’s defining features is that it produces rum from ‘vesou’ aka fermented sugarcane juice, or from molasses. In both cases, the rums are traditional, meaning that the volatile substance content (the total content of volatile substances other than ethyl and methyl alcohols) is higher than 225 grams per hectolitre of pure alcohol according to European legislation. The non-alcoholic content guarantees rich aromatics and a strong identity for consumers. One noteworthy point is that ‘full-flavoured’ rums (or “grand arôme”) must contain at least 800g of volatile substances per hectolitre of pure alcohol. So, Guadeloupe produces traditional rums, which can be made from molasses from the sugar industry, or from sugarcane juice – vesou – which makes them agricultural rums.

Distillation is a means of selection and concentration which obviously draws on the type of raw material – sugarcane – and the quality of the fermentation. Distillation, which is at the apex of the process, reveals a rum’s provenance or terroir to enlightened enthusiasts.

As professionals, we reserve usage of the word ‘degree’ for the weather, which is particularly mild in these tropical climes, and use the acronym ABV for the total alcoholic strength which is expressed in % by volume.

The flavour profile of white rums

Christian Vergier, winemaker and spirit maturation specialist, explains the rationale behind the higher ABVs : “Although traditional rums from molasses can be enjoyed at a relatively low ABV, in the range of 40% by volume, the subtle characters of traditional agricultural rums usually reveal themselves more at an ABV in excess of 45%. Expression and elegance require impeccable balance, which is closely linked to the choice of ABV. The aim of each region, or even distillery, is to define that alcoholic strength. There are myriad possibilities for an ideal ABV – the Guadeloupe archipelago is the perfect illustration of this, such is the range of ABVs, some of them unique. For white agricultural rums, Marie-Galante has a preference for 59%, whereas Basse-Terre has a soft spot for 50% and Grande-Terre seems to be loyal to its 55%. Drinking habits also have an undeniable influence on the judicious choice of ABV. Over the past few years, rums with very high ABVs have entered the scene, some of them over 70%. It is important to remember that alcohol naturally displays a certain smoothness, so it is not surprising that the flavour is less intense and ‘fiery’ as you might initially imagine.

When it comes to mature rums, although some overproof and cask-strength bottlings have emerged, the ABV spectrum tends to be more harmonious, ranging mostly from 40 to 46%”

Lydia Moinon, head of marketing and communications at the Bologne distillery, concurs with Christian Vergier. 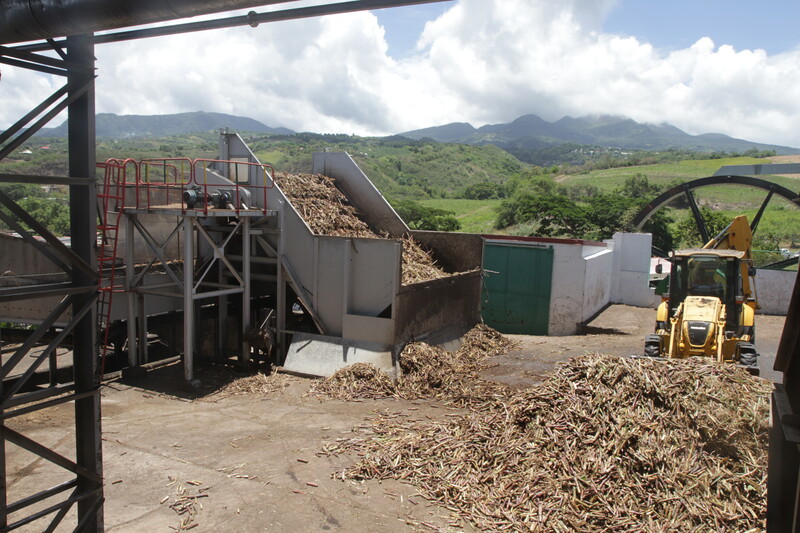 50% white rum is the most popular iteration in Guadeloupe, and is usually drunk as a Ti’ Punch. Made from white agricultural rum, cane sugar and a zest of lemon (not juice), the cocktail is drunk as an aperitif with spicy cod fish cakes and Creole black pudding, which epitomise West Indies cuisine. Similarly, 50% ABV white rum is an easy fit for anyone who wants to make their own fruit-based punch. There is no need for an alcoholmeter, you just have to mix identical amounts of 50% rum and fruit syrup.

Enthusiasts will tell you that 55% is preferable to 50%. “This is the ABV where white Guadeloupe rum best enhances the lemony, green and bitter notes of the zest” comments François Longueteau, the cellar master at the Longueteau distillery. “Older people will smile and say that the advantage of a higher alcoholic strength is that you only need one Ti’ Punch to really enjoy it. However, I doubt that in Guadeloupe the aperitif ends with just one Ti’ Punch”.Or to paraphrase the famous chorus of the song by Compagnie Creole – “One Ti’ Punch, Two Ti’ Punch, Three Ti’ Punch, Darling”.

I have yet to fathom why Marie-Galante has opted for 59% and would therefore not venture any explanations. Different theories have been suggested but there is no denying that the custom is very much alive and well.

The long and short of it is that 40% ABV is a pure product of globalisation and in no way reflects traditions in Guadeloupe. It is only produced by distilleries to satisfy market demand.

Producers recommend using 50 or 55% ABV rum in cocktails in order to fully benefit from the powerful aromas and flavours of sugarcane. For example, 4 cl of 50% ABV rather than 5 cl of 40% – the amount of alcohol remains the same. One noteworthy fact is that classic rum-based cocktails were not created using agricultural rums. Mixology professionals are not trying to replicate what has already been done with molasses-based rums but rather revisit flavours or invent new recipes that preserve and enhance the aromatic qualities of agricultural rums.